hope to hookup a nice shark this summer my 16/0 senator and unlimited class fenwick. granddaughter just for scale lol 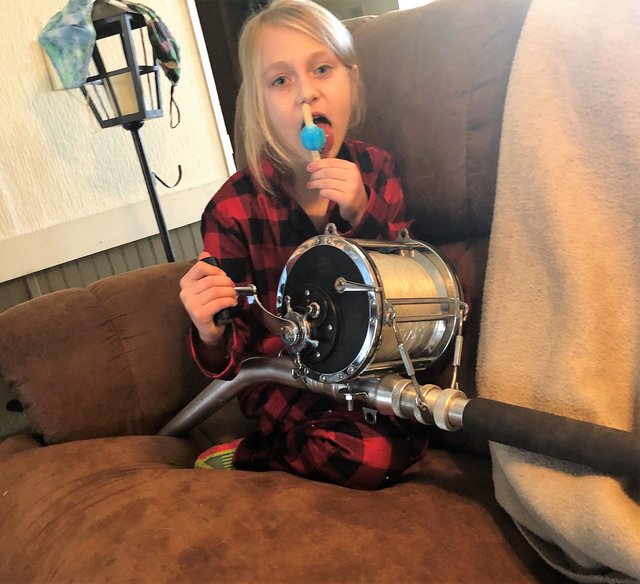 Tat's A nice rig.
Plenty of fun when the line goes tight.
Gecha (Gerry North of the Border)
Top

Many years ago (circa late 70's), I spent a day with my grandfather and Dad fishing for bluefish out of Ocean City, NJ. Dad's not a big angler, but he has supported my passion and shared in several trips starting in 2d grade. This trip was special, as his father was ageing, and it was 3 generations. His father shared my passion. We trolled and caught several blues, and then a hooked blue was inhaled by a big hammerhead. After almost 2 hours, I got the hammerhead to the boat on a Penn Senator. Crew grabbed a Bang Stick and put several loads into its head before cutting the line. I was young, and it's not the way things are handled now, but I still cherish the memory (with some regret). I've caught hundreds on blues since, a few makos, and a few hammers, mostly on fly and released. In the Keys 2 summers ago we had several big sharks bought to the boat. Good luck with the sharks! They pull HARD!
Top

wow great story, to bad you couldnt have saved the jaws att least. i lived in bonita springs for 5 years in the early eightys. did some shark fishing off newpass and big carlos bridges but never had any luck. thinking of a charter off maine.
Top

Nice rig Matt.
I use to fish out of Newburyport MA and Glouchester, MA back in the early 90s for a couple years on my 24' for Bluefin on almost the same rig with a Pen 12/0. I've since sold both rods, but, now move to Southern ME and am fishing Stripers, Cod, Haddock and go to Sebago for Salmon and Lakers.
Looks like you will have a great time with that rig.
Where are you going out of?