Saturday we were out trolling the 4 brothers' area and noticed the shore lines were black. A pair of binoculars allowed me realize the black shore lines were cormorant populations. In keeping up with this forum subject, I decided I would get plenty of pictures. Unfortunately as I got in close the islands the coast guard announced the storm coming in, so we headed back toward Shelburne Bay. My suggestion is we all collect plenty of pictures of cormorants on the islands' shores, and flocks flying by and send them to a and/or some government official(s). In other words become the squeaky wheel. Realize as a Canadian might not be my business, but we do enjoy the fishery and lake, plus our spending must count for something.
Last edited by DreamWeaver on Tue Aug 07, 2018 8:51 pm, edited 1 time in total.
Top

Took this picture from a distance with zoom, but I wasn't close enough to really capture the tremendous amounts of cormorants.

The international weigh-in from our northern neighbor is greatly admired and appreciated. This is the first time that I have heard a reference to the boat industry lobbyists as a potential focus for future efforts. Sounds like a great idea!.
Lures designed by fishermen for fishermen
Top

I live on Porters Point in Colchester. I happened to look out directly straight out in front of my house around 11:30 or 12 o'clock today and I almost could not believe what I was looking at . There had to be thousands of Cormorants. They extended almost my entire viewing area. If something isn't done there won't be any fish in the Lake....period.
Powers that be need to get their head out of their hind quarters.
Top

I was out last week and used the Vantines access . Fishing sucked I got skunked. When I got to the ramp there were two trucks one with a trailer. One truck was a state truck and the other was a government truck that had the trailer. When I got back to the ramp they were just pulling out of the water and noticed that one guy had a EPA shirt on and the truck had rabies control sticker on the truck. I asked them if they were putting rabie pellets out in the lake and the said they were trying to keep the cormorants off the island out from the ramp. I asked if they had a shotgun and they said they had two.
Top

Canadian Neighbors trying to help. Follow up to my previous post on this subject. After Canadian/Ontario Government removed the Double-Crested Cormorants from the protected list.
There are now consultations on establishing a hunting season for this bird.
https://ero.ontario.ca/notice/013-4124

Trust this will help in some way.
Top

I have a place on Grand Isle and have often looked out and seen hundreds, if not thousands of cormorants, flying or even floating by the bay. I'm an avid fisherman, not a hunter, but would gladly help reduce these birds to an acceptable population.
Top

https://www.sorel-tracyexpress.ca/actua ... int-pierre
i've done a little research and found this article. It's all in french so i will translate in the shortest a quickest way possible.
Pretty much what this article says is that on the Lac St Pierre (quebec) there has been some measures taken to reduce the amount of cormorants on on the lake. Which is, in part related to great decrease in the amount of perch.
In 2008 they steralized the eggs to reduce its reproduction, and in sept 2012 there was 651 cormorants killed.There was also something mentioned about 2013 but i cant find any info on what was done.
In conclusion of this they estimated that there was decrease of 55% of perch consumed by these birds compared to 2002.

Hopefully it will be done more often but as we all know its pollitics and money.
Top

Dreamweaver, cormorants are bad but lampreys are much much worse! Vermont is unable to treat a significant portion of the Pike river in Quebec because your(Quebec) Environmental people refuse to accept the safety of TFM. This is not problem in Ontario only Quebec. The Great Lakes Commision treats the Canadian side of Lakes Superior. Huron, Erie and Ontario so why not Champlain? The Pike river is the last potential major producer in the Lake still untreated and if it isn't treated it could mean we can't achieve the Lakes potential in the northern tier. We need Lake Champlain Canadian fishermen to help us!! Contact these people and challenge their obstinate position on TFM. Ask them why Ontario accepts TFM and not Quebec. We are going to contact the Great Lakes Commission Secretary for his help but we need grass roots support. Hope to meet you some day on the lake.............Tight Lines!!
Top

I comerants look worse than ever this spring... coming up from south, were many Flocks of 20-100 the other day while we were trolling...
Matt B
Top

In the maritime provinces _Nova Scotia and New Brunswick there is no season to kill, you can shoot them all year around. Should be the same here, Ontario, NY and Vermont!!
Top

Hi innKeeper, will definitely look into and use some of my contacts to see what we can do to help.

Hope to get my boat out in the coming weeks, need the snow to melt a little more. Target to get on the lake sometime end of April beginning of May. Tight lines and bent rods.

We will most likely get the chance to meet.
Paul
Top

For all, in response to innkeeper,
" Vermont is unable to treat a significant portion of the Pike river in Quebec because your(Quebec) Environmental people refuse to accept the safety of TFM."
I have done some research and found an article on Lamprey Control on the Pike River.
I will post a separate subject not to dilute the efforts on the cormorants.
Subject will be : QC Pike River Lamprey Efforts
Top

I was poking around the inland sea a little this morning. Ice is out. Lots of dead big alewives.

There was a big flock of cormorants by the Apple Island launch. I stopped to investigate, and learned that salmon and browns had just been stocked there and they were lingering in the cove. Ugh.
Top 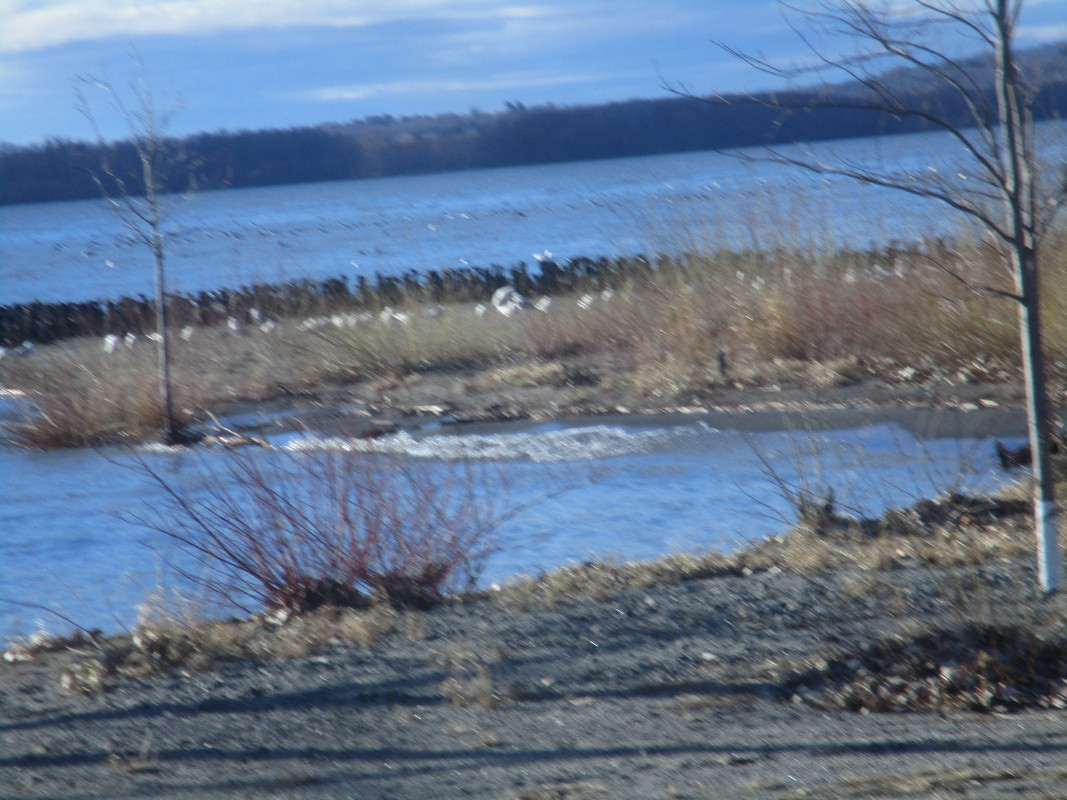