So since our usual Father's Day private charter trip wasn't able to get scheduled with the COVID-19 junk coming out of restrictions so late that the trip wound up being canceled (hopefully can make it up this Sept.), we decided to book a 12 hour marathon trip for a 5 to 5 outing.
Started out with a lighter load of people so wasn't terrible manning the rails.
Weather was good most of the day, but the ride back was arduous with rough seas.
90F onshore, but in the low 70's way out there.
We hit haddock right off the bat, but as soon as a few came over the rails the dog packs showed up and we'd have to respot and this was pretty much the norm all day. The tide was strong and the drift sock had a hard time and we'd drift off the hump too quick so the captain moved to anchoring but was pretty much the same story, drop lines, pick off a few then the dogfish would show up and ruin the party.
My son & I managed 20 haddock, 2 big cusk, a mack, a whiting and a couple of big pollock, so we had a blast and appeared to be one of the few sets of people that made it off the boat with a bigger haul.
Drive back home to VT was uneventful until we rain into that massive storm front which we had to slow down a lot just to see the pavement, but still made it home at a decent hour.
All the fish we brought home we nicely packed in plenty of ice and I came home from work Tuesday and filleted them all and we wound up with 20# of fish fillets, which we grilled some haddock and ate Wednesday...YUM!

Oh, forgot to mention we had a the USCG cutter out there on station long before we even dropped lines, then later in the day we had a Mola decide to come check us out (which i did manage to get a pick of it as it was clearing the stern and submerging again). Was neat to see this fish that is the size of a car hood and probably int he 300# range. 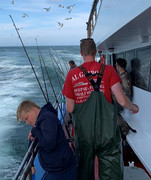 Nice! Sounds like you guys had fun. We saw an ocean sunfish one time out there while tuna fishing. Very cool fish ... and huge!
Top

Now that sounds a blast.... and the 20lbs of fillets are just the icing on the cake... I bet you could fill a boat with the guys here that would do that trip!

Thanks for sharing..
Matt B
Top

Looks like you had a lot of fun Rick. Thanks for sharing your ride and for the pics.
Gecha (Gerry North of the Border)
Top

And the nice thing is those Penn Squall reels I bought and the old Penn Senator rods I put them on can be re-purposed for flea season on Champlain.
40# mono on both and even though they don't have line counters I plan on trying them out with dipsy's real soon.
Top

Sounds like father and son had a great time for sure.
Now that I live down in S. Maine it is fun and tasty to be able to get out for Haddock and Cod.
Let me know if anyone wants to go out sometime and I might be interested in joining you.
Penn Squall reels are definitely the way to go over the old Penn 113 ore 114. A Squall 20 is really a good size to use.
A Viking jig will definitely keep the dogfish off the line.

Mudchuck got the ball rolling. I've done the trip before with Dean (Home Wrecker). Is there interest in a salty trip? Let's get LCU aboard and show 'em how it's done. With enough interest we can book a charter, or we can reserve spaces. I'm in. Others? Bring your coolers!!
Top

I’d be into an LCU deep sea trip... The group would make a great fishing trip even better!
Matt B
Top

a friend and i was just planning a trip oit to jeffreys ledge. looks like you had a great time and caught plenty of fish. i just read where the dogfish are really bad there.
Top
Post Reply
10 posts • Page 1 of 1